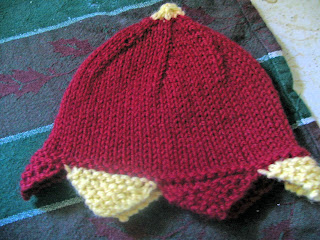 Thought maybe it was time for some knitting related content...I finished two little projects this week:


This is the Gryffindor House Elf Hat (or some such name) from "Charmed Knits" the Harry Potter Knitting book. I made it using Encore Worsted leftovers from another project. Hads, I am sending this to you to make up for comparing you to Uncle Fester. Love you doll! It looks real small, so maybe your cousin Mads will get it real soon...

My second project has been languishing in my work room for months, while I tried to avoid sewing in a lining. But I got the bug today to finish it, so struck before I lapsed back into laziness. 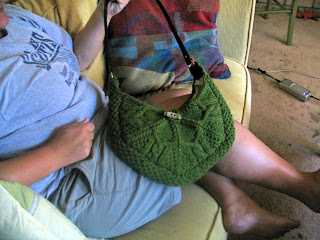 This is the Brea Bag, which is a free pattern from Berroco (click to get the pattern). I finished the bag itself ages ago, and promised it to daughter Pia (and she hasn't even nagged me about it) I used every bit of the 2 skeins of Ultra Alpaca the pattern called for and still had to buy another to finish the bag. I then decided it could really use a lining. I bought a pretty piece of embroidered silk fabric and found a stone button and a purse handle we both liked (mind you, I had to purchase 2 sets of each before Peeps was happy).

I dug out the sewing machine, which (thank god) was already threaded and ready to go. I found my trusty old left handed Gingher scissors, which NO ONE is ever supposed to touch. I traced the outline of the bag on a piece of paper, and added an inch or so for the seams, plus measured out (eyeballed really) a straight piece of fabric for the bottom/side section of the bag. Grabbed the scissors, and started to cut -- and immediately stopped. Apparently, my years of death threats if my scissors were ever used by anyone have been universally ignored. I think someone used them to cut steel pipe or something, because they are so dull as to be unusable.

I found some old Fiskars scissors, also incredibly dull, but with a tiny edge up near the tip that I could use to hack through the fabric. I then sewed the lining, hand stitched it into the bag, and added the button and the strap. Voila! A very pretty purse!

Here's a picture of the lining: 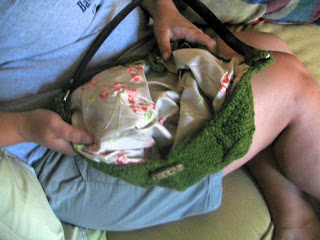 So now I can cross off one project from the Unfinished List, woot woot! Nearly done with the body of the Kauni Cardigan, will be cutting that real soon and then knitting the sleeves. Pictures coming of real live steeking!

Hads cannot wait to wear her elf hat...but with her Uncle Fester head, you're right, it may not fit her for too long. Long enough to get a photo op with Dad in his Gryffindor gear for sure!!!

yeah! I can't wait to see the HP nerds (oops I mean fans) with their official headgear.