We Visit the Elves!

Liam, Steve and I went to the "Santa Express" the other day. It's a benefit for the Vanessa Behan Crisis Nursery, and kids get to shop for presents (they are donated by area businesses and priced from .50 to 7.00) with an 'elf', then wrap everything. Liam was a great shopper, and was very excited to get to buy things for his brothers and his mom. In fact, he made Mama open her package that night, he couldn't wait (it was beautiful jewelry).

Afterwards, we stopped by to see Santa. Liam asked for a violin (which he's been asking for for at least 2 years), which gave Santa a moment's pause; Santa said no one had ever asked for that. The next little kid totally stunned Santa when he asked for a dress! His mom said he 'liked to play dress up'. LOL it was hilarious, poor Santy didn't quite know what to say. He just handed out candy canes. And if you've got em, smoke em: 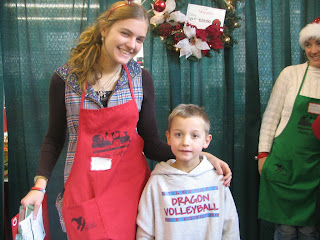 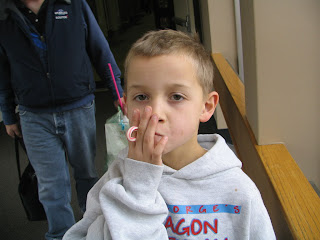 Love the candy cane smoking. You can't go wrong with that. My students worked at Santa Express today. I'm sure they had tons of fun while I decided the fate of some poor guy on jury duty today!

I remember Vanessa Behan! Love the smoking candy cane...reminds me of the days of loving candy cigarettes with REAL smoke. Sounds like fun, you and Steve are such fun Grammy's and Grampy's.