It's 'Little Tony's' birthday today! My baby is 26 (I had to use the calculator to figure that out). How time flies.
Let's take a little trip in the Wayback Machine, and "listen to the story of a man (nick)named Fred": 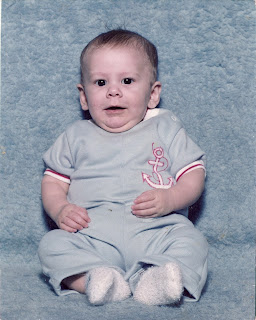 Here's our little "Snitzy" age about 3 months. Yeah, he kind of looks like Bob Evans (or maybe even Sam Evans) but we still loved him. 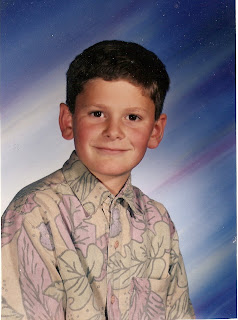 School picture, posing with his trademark 'shirt buttoned all the way to the top'. Even on the hottest day of the summer, Tonsy believed in keeping it all buttoned up. Safety Sam! BTW, does he not look a LOT like Uncle Chuck in this pic? 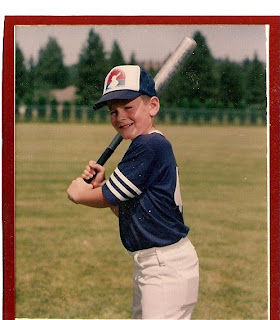 Tony turned out for baseball every summer, just to please his mama. Poor guy was on a new team EVERY year, generally not a great one either. Our fave team was the Waffles Plus Warriors, did they even win a game? Maybe not, but there was always the possibility that coach would treat everyone to waffles! Note the other signature of a T. photo: Squinty Squinterson. 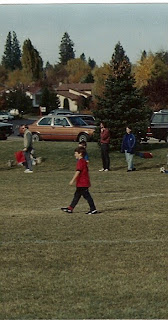 Here's Tony doing what he loved best: playing soccer. Can't tell you how many hours we spent on the sidelines cheering on our boy. Remember the incident when I nearly got beaten up by the crazy soccer mom from Seattle? Just bc I said her kid 'flopped', god.

And basketball was another love. Starting in first grade, when he endlessly hucked up granny shots during timeouts in the Mettersdome, Tonsy was seldom seen without a basketball in his hand. My favorite moment? Middle School, big game in the Knights of Columbus League, Tony grabbing the ball, falling out of bounds, and dramatically calling a time out as he went down. A Sports Center Moment! The Crowd Went Wild!

And here's Mr. Saint George's Soccer, happily smiling after a winning season (and state championship). That was a super fun time, esp. when our Tonsy kicked the winning goal in the state championship game. Dad and Mom immediately burst into tears, we were so happy for you. 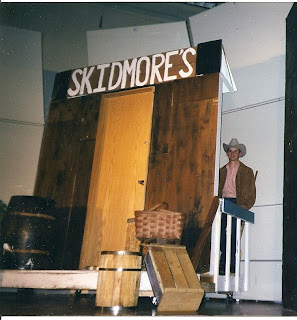 Did you know that Tone is also a musical star? Here he is in the school production of "Oklahoma!" I forget who he played, some random cowboy. I think he had a couple of lines. His biggest starring role was in Middle School when he played Kenickie in "Grease". Who can forget Pooh riding in on the chopper? 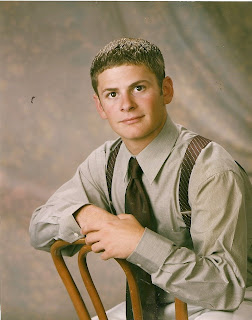 All Grown Up. And so handsome! I love this pic of Tone, he def. rocks the suspenders. I think he got his first pair when he was just a toddler, and loved to wear them -- again with the Safety Sam. 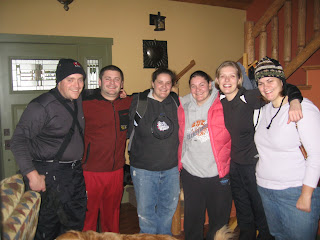 And here he is with his cousins and sibs. God we miss you, Fred! Come home soon!
Posted by Laurie at 8:59 AM

great photo montage! the pics are great, and I agree - the SG state-winning soccer goal was maybe my favorite memory of Pooh Bear ever, tears and pride don't even begin to cover it! :) He kinda looks like the Rotcher in that baseball pic. And i totally had forgotten about you and that crazy soccer mom getting in the parking lot fight!

how could you forget, greatest soccer mom story ever!

happy birthday, fred! cant' believe he is 26!!! loved all the pics...bring back many memories. and, soccer moms are crazy!

Nice story....Happy Birthday to you Fred!

Happy b-day brother. And funny Katie, cause I was thinking the little kid soccer pic looked like Cara... the family genes run deep!

totally needed the Toddler Safety website when you were little Tonsy. Remember crashing into the shopping cart face first @ Top Foods? Check pix for the scar!

OMG, milk coming out of my nose...forgot about the flopper. Happy Birthday Teen Tone!!! We love you.