My New "Worst Movie Ever" 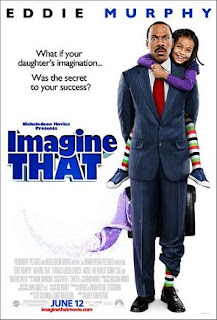 It's now "Imagine That" with Eddie Murphy. Why, Eddie, why? The boys and I go to a summer film series, which has a 'special surprise movie' at the end; usually it's a good one that we've all wanted to see. We were hoping for Ice Age 3D, but we got this piece o crap instead. I can't even 'imagine' who this movie was made to entertain. The plot:
In Paramount Pictures and Nickelodeon Movies’ family comedy “Imagine That,” Eddie Murphy stars as a successful financial executive who has more time for his blackberry than his seven-year-old daughter (Yara Shahidi). When he has a crisis of confidence and his career starts going down the drain, however, he finds the solution to all his problems in his daughter’s imaginary world.
"Bizarrely charmless and misconceived from start to finish, it represents yet another nail hammered into the coffin of Eddie Murphy's career. "
The kids weren't at all interested in Eddie's 'career crisis', and his daughter's imaginary world was sooo retarded (she put her blanket over her head and has conversations with her little friends with incredibly stupid names). We did enjoy the popcorn, however.
What's your worst movie ever?
Posted by Laurie at 2:40 PM

but god that does sound awful. i hope you complained to the management.

no I was just so glad when it was OVER all I wanted to do was escape.

definately powder or how to make an american quilt. only movie ive ever walked out of

remember "Celtic Pride"? Why did we go to that movie? I fell asleep during it, which I think I've never done in any other movie.

Hands down, From Justin, To Kelly. I made Tony and Katie sneak into another movie afterwards to make up for the fact that I paid for that craptastic piece of movie magic.

haha, at least we didn't PAY for From Justin to Kelly, unlike you Peeps! ;)

First of all, PIA...YOU went to 'from Justin to Kelly'? Wow, you and the 5 others that saw it have some really bad taste.
My worst movie ever was the 'St. Tammy Miracle.' I think Zach Morris was the star. Or does it have to be a movie we actually went to...this was just a video.

must be a movie you actually went to, doesn't count if you were just a slug on your couch and got sucked into watching.

haha, Meg don't blame Pia... i believe that Cara, Tony and I were at some movie and decided to sneak into FJTK and talked Pia into coming as well. i'm just happy it was free, cuz it was awful.

WTF is The St Tammy Miracle? There CANNOT be a saint named "Tammy" bc that is so not an Irish Catholic name.

St. Tammany Miracle. Way to think this one through Lavs.

still don't have any idea what that movie would be about. sounds really bad tho.