Our Dad The Hero

Dad never talked about his service in World War II, which he entered in 1942, as a very young 18 year old Marine right out of high school.  But I've been able to find out a little info about his military service:

Dad had enrolled in the premed program at UW (the ONLY time I will ever mention the Huskies without adding an insult)  but enlisted with the Seattle Platoon of Marines in November 1942.  His unit was the 1060th Platoon, and served with the Fourth Marine Division in the South Pacific.  Here's a link to a history of the 4th Marine Division's role in World War II; they were quite a unit, participating in 4 major amphibious assaults and winning 2 presidential citations in just one year.  He served for 3 years in the Marine Corps.

Dad was awarded the Presidential Citation and the Purple Heart for wounds received in the Battle of Saipan: "For the Americans, the victory was the most costly to date in the Pacific War. 2,949 Americans were killed and 10,364 wounded, out of 71,000 who landed."   Dad also saw action earlier in the war, in the Marshall Islands.


Dad attended UC Berkeley as a "V-12 student" (a program designed to grant bachelor's degrees to future officers in the Navy and Marine Corps).


And further proof that our Dad was a solid citizen: 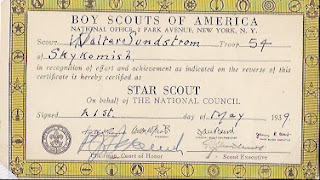 I love this post mom. His unit was pretty bad ass. Mimi told me one time that they were always the first on shore during WW2. And she told me he was injured; he took some shrapnel in his rear end. :)

hey a war wound is a war wound. And I read on Wiki that the actor Lee Marvin got the same injury in the battle of Saipan :-)

aren't you glad I made you lug all that stuff home????

I am Sue. We just added a bunch of pictures to our family wall including the naked baby pics of Walter and Lois. So cute!

definitely love being the family historian. Just wish we could identify more of the people

You're such the historian. I love it. And I'm quite certain I would have loved him. Without a doubt.

you guys would have loved him to pieces. Such a nice man and loved kids. He would have totally enjoyed the grand and great-grandchildren.

And would probably still be hiking, jogging, skiing, sailing and all the rest.

Miss him SO SO MUCH