More from the Family Album

Here are some more pictures from the family albums.  These ones are from the Giusti family album (Baba's family)  Sadly, none of the photos in this album have names to tell us who is in the pictures.  And even more sadly, Mom was unable to identify most of the folks in the photos.  This is a good reminder to label your pictures people!  Before you know it, there isn't anyone left who remembers who is who...


Susan and I were able to figure out a few of them.
I love this one, it's either Baba or his brother Charlie: 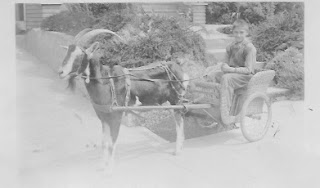 That goat is kind of scary though.
This photo is labeled (one of the few) "1912, store Pike Place Market Seattle" with "Ma" and "Pa" identified as the two people standing at the left and right.  We know that the Giustis did have a little grocery store in the market at the turn of the century, so I'm assuming these are our great-grandparents: 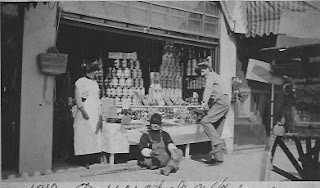 I love the buggy in the right foreground, and it's fun to know that our ancestors were among the original Market merchants
Okay, these two are awesome!  I'm giving them to Jon, our Great White Hunter.  The back of one says "1910: Dad with Deer shot at Duvall" 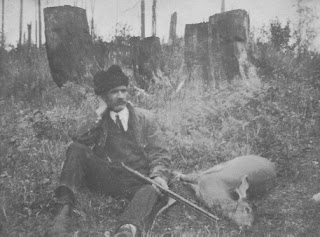 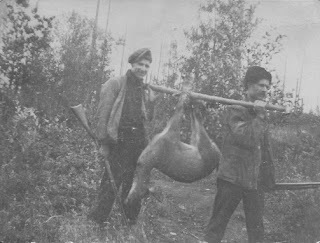 I'm guessing the gent on the left hand side of the pole is Baba's dad, as he looks like the guy in the Pike Street Market picture.  I'm in love with Mr. Handlebar Mustache though... and their hats are too cool.
And you can bet that in 1910 it was a great adventure to trek to Duvall to go hunting.  No roads (no cars probably!), that would have been out in the woods for sure.
Posted by Laurie at 6:09 PM

Even without labels those pictures are awesome. I'll bet some historical society would love scans of them. You might contact MOHAI.

Good idea! There are some cool pix from early 1900s. And another that was labeled with the address of the house they built in 1910. I looked it up on Google and it's still there, looking EXACTLY the same. I should take the pic to those people next time I'm in Seattle

WOW! So fun to see these.