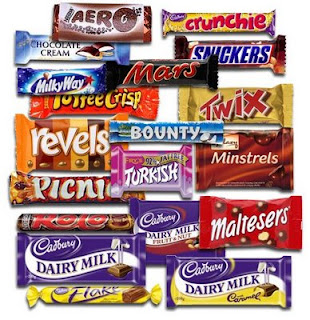 In anticipation of our trip, I'm researching all things Brit.  Pia and I were discussing American vs. British candy this morning (sadly, P, I couldn't find the "Schnickelfritz bar" I mentioned lol), and she is of the opinion that British chocolate is too milky.

Evidently, this Brit vs. US candy bar debate is intense and bitterly divided.  If you grew up with Cadbury's Dairy Milk bars, you are not a fan of the US version produced by Hershey's:

It’s a different bar from the Cadbury bar available in the United States. According to the label, a British Cadbury Dairy Milk bar contains milk, sugar, cocoa mass, cocoa butter, vegetable fat and emulsifiers. The version made by the Hershey Company, which holds the license from Cadbury-Schweppes to produce the candy in the United States under the British company’s direction, starts its ingredient list with sugar. It lists lactose and the emulsifier soy lecithin, which keeps the cocoa butter from separating from the cocoa. The American product also lists “natural and artificial flavorings.”


There are different versions of the Mars Bar and the Kit Kat (which P stated categorically she will NOT be eating in England):


"Mars bar, the prom queen of British candy bars. About three million of them are made daily in Slough, just west of London. It’s like a less sweet version of the American Milky Way, rather than the almond-stuffed American Mars bar.    Kit Kat, invented in York, England, in the early 1930s and available in versions that match the tastes of, variously, Japanese, Germans, Australians, Canadians and Americans."


What the hell is Turkish Delight with Rose Jelly?  And what is it doing in a candy bar!?


We will have to do some intensive investigatory work when we are in England, and will report back on the US v. Brit Candy Wars.
Posted by Laurie at 8:57 AM

I might have to have you bring our friend, Tracey, some Kraft Caramels - nothing like that in GB

why would you eat Kraft Caramels when you could gnaw on a Macintosh's Toffee??? Seriously, I will risk pulling all my crowns off for one of these.

Car, we are eating Walker's Shortbreads. That is all.

There is no such thing as too milk chocolatey

In my defense, I said I didn't want to eat British candy that was a poor replacement for American candy. I want my Kit Kat to taste right :) I will happily eat Mackintosh caramel or a Toblerone.

Macintosh Caramel...or is that only in Canada. Turkish Delight? I thought they only ate that in the Lion, the Witch, and the Wardrobe. I say bring home all of the above and we will have a cabin candy tasting party.

ooh great idea. Will bring an extra grip for all the candy. We can each bring home 800 bucks worth duty free!