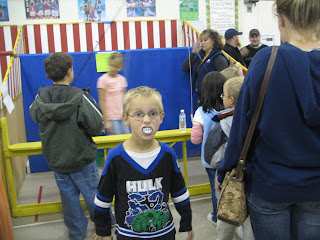 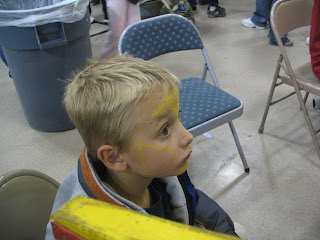 We had a fun time at the Linwood School Carnival (thank god I am no longer in the PTA and don't have to organize this sort of thing, it was a total madhouse). Alex is modeling the vampire teeth he won in the fishpond, and Liam is getting his face painted as a cheetah (Al was a 'White Ninja, very terrifying). Liam won a cake in the cakewalk and we enjoyed the gummy worm dirt cake he chose. I never did get any pictures of Riveria, as he was in 2nd grade tearing around mode. He did get put in jail 3 times (by GIRLS), but that was about the only time I ever saw him. Mikey observed all the action for future reference, and Lorraine, Grandma Eileen and I just tried to keep an eye on everyone and stay sane.
The three big boys then spent the night with us, always a great time! We stopped at the market on the way home, and Liam asked "do you think the store people will know we are humans?", as he felt his cheetah makeup might confuse them. We decided that he could show his hands, and that would tell them that he was a human since he didn't have paws & claws.
Posted by Laurie at 10:31 AM

Sounds like lots of fun! I cannot believe how giant the twinnies are getting! scary. :) And say hi to Grandma Eileen!

wasn't it just adorable? that boy is a heart melter. And you should see their FEET if you want to see giant. And their legs are getting sooooo long. Oh and Al told Lorraine that if he ate this candy, he would 'get a brain aneurism' (such a grown-up word I can't even spell it!) lol what a guy

LOL about the grocery store. This is the reason I want 20 kids, because they are sooo darn cute! But I do not envy you at the carnival. I went to a carnival with you once at Sunnyside (whatever WT elementary the girls went to in Frontier Village) and I won a prize for hitting a nail into a board in one try. Of course I cheated, but got a great prize! Most likely a lemon with a candy cane straw!!! And since there was NO supervision, I'm sure I stole a few other things too.

it was Sunnycrest, and no more WT than Maywood (I'm just saying that cuz I was PTA prez), and I stole all my carnival ideas from your mom's giant carnival notebook. BTW does she have a notebook for EVERYTHING? Wish I was organized like that (not)