Portland is for (Yarn) Lovers

Pia & I met up  with Susan, Pam and Tate for a fabulous weekend in Portland!  The occasion was the Rose City Yarn Crawl.  19 yarn shops in a weekend.

We didn't make it to all 19 stores, but we managed to visit quite a few (11, by Tate's count)  Our favorite was the wonderful Twisted.  My new favorite is Close Knit, because I just got word that I WON one of these: 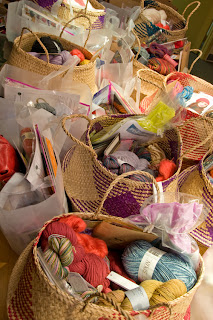 People, these baskets were LOADED with great stuff.  I am so excited (esp. since, as my faithful readers know, I haven't won anything since I scored a hundred bucks playing Safeway Bingo back in 1978)

Here's a picture of three of our yarnies: 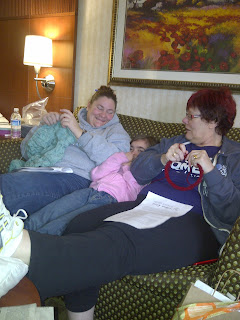 Tatum was the best participant, she insisted P & I come over to their room and knit.  She was gung-ho for going to all the shops on the crawl, and she (in true knitter style) had several projects going plus bought more yarn.

It being Portland and all, there were annoying "Portlandia" moments.  Here's Pia at the world's worst bakery/coffee place (in my opinion): 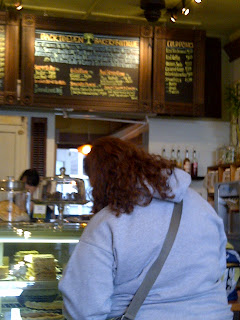 Vegan, blech.  I about had a stroke when the barista suggested "coconut cream, soy or hazelnut milk" for my coffee instead of half and half.  Never a Starbucks when you really need one.

And Pam graciously modeled the Ladies' Undervest for me, after it was suggested that I find a model with boobs and a waistline: 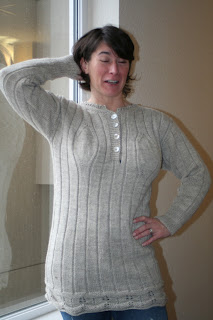 In, in, and in. And I claim half your prize, as I registered you for every single basket and I got Melissa to pick it up for you. :) So excited that you got to be a winner this weekend. It was a great success.

halfsies. You can have all the acrylic yarn.

I AM the lucky pup. They said there were 800 entries, so I've totes used up all my luck for life