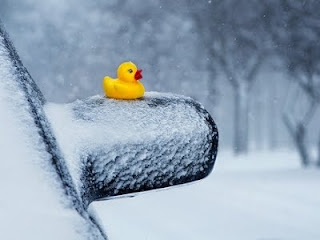 Spring can not come soon enough.  We had snow this week, ugh.  The yard looks terrible.  I'm going to pay the price for failing to finish raking all the leaves and pine needles last fall.  And it's just generally dreary outside.

So I'm sort of stuck in the winter blahs.  Winning the British Airways ticket this week was definitely a boost to the spirits, but that trip isn't in the near future.  We're in a holding pattern waiting for nice weather and the chance to do some outdoor stuff.

The house is in dire need of a good spring cleaning.  Katie got a Groupon for housecleaning, which is great.  But you KNOW we have to clean before we can allow a stranger to come in and clean.  Everything needs dusting, washing, vacuuming, etc.

So, how to motivate?  Suggestions welcomed :-)  I think I'm going to have a second cup of coffee and think about it.  Then maybe take a nap.
Posted by Laurie at 8:17 AM

The 2nd cup of coffee and a nap are the perfect way to start Sprng Cleaning - then you can dream that your whole house was clean!

In my Maidenform Bra...

i could NOT agree more. totally have The Blahs. Boo.

come with pooh and i to punta cana next month.

ooh I'd love to. But must be good and save for London.