The Hostess With The Mostest 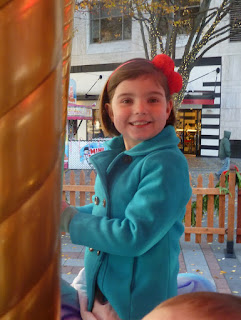 So Zaids and I stopped over at the Prentice's abode for a brief visit today.  Carsie was already down for his nap, but Miss Hadley was still up.

And she had a load of stuff to tell her Auntie Lowdie.  First I got to meet her new Bitty Baby, or "Pepper Candy Cane" as her mama has named her (today anyway, I suspect the name is a moving target).  She showed me the sweater I knit for BBPCC, which she had hung neatly up on the coat rack.  Evidently BBPPC had just gotten home.

Then we headed back down to the living room for a tea party.  And a grand party it was.  Even though  her teapot lid was broken, she put on a festive party for the two of us.  With mints, a plastic hot dog bun for BBPCC, a plastic cookie for Hads, and a wooden sushi roll for me.  YUM!  Mama chipped in with a bagel and cream cheese.

The party was topped off with Hads demonstrating some of her gymnastic moves (first class tonight. I'm sure you killed it HJP), and plenty of chit-chat about all the stuff she has been up to.  Plus Frank P. nibbling me with his tiny needle-sharp puppy teeth.

A perfect time was had by both of us.  I need a Hadley in my life, please!
Posted by Laurie at 9:57 PM

she is too precious! if only her mama would update her blog more often!

Wait! I got her that purse/glove/necklace combo! I feel so special!

LOVE LOVE LOVE that girl. She is something else.

the gloves and jewels were TDF. You should have sprung for a tiara tho.

She is pretty awesome. Good gift Katie. I love that she completely monopolized your visit. :) Love you crazy ladies.

Aw! Those prentices sure know how to put on a party.

AHHHHHH Lavies. You have no idea how much I love this kid. Actually I think you do...you've got four you love just as much. Isn't weird? To think you can love someone soooo insanely much!!? It's bananas. But I will tell you this. She's like a dog, she's a great judge of character. She doesn't just throw a tea party for any ole' bloke.

And Kate, Lauren and Hadley fought to tears over the Cinderella accessories. You dun good sista.

plus she let me have the sushi and made Pepper Candy Cane have the stale plastic hot dog bun :-)

Agreed, one's children are the best people in the universe and the heart can't hold all the love you feel for them.