I decided to try a new form of transportation from Seattle to Spokane this month.  I headed down to King Street Station and took Amtrak home!  It was pretty fun, other than getting home at midnight (thanks for coming to get me, Peeps!) and having restless leg from Wenatchee onwards. 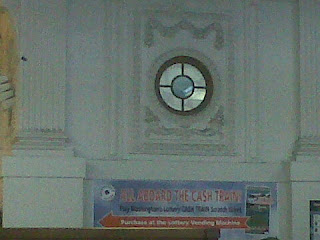 The King Street Station still has some of its old grandeur: fancy ceilings and marble here and there.  It was clean and not scary :-) 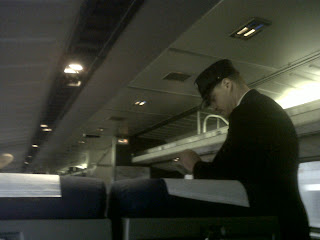 The conductor wears a conductor cap and punches your ticket!  Love.  I ate dinner in the dining car (the food was not great, but how often do you get to eat in a train dining car!  and they serve booze.)  I was horrified to learn that I would have to eat with 3 total strangers, but I girded my loins and actually had a nice time with a couple from Albany NY.  He retired from the railroad, and I learned some fun RR facts (each conductor has his own "punch" symbol.  Who knew?  My conductor's punch symbol is evidently a blob).  I spoke to strangers!  I'm so proud of myself. 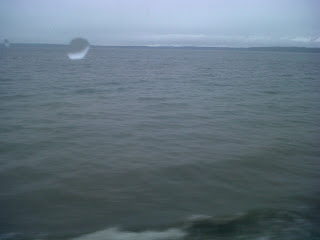 Here's the view right out the window of Puget Sound.  You are literally right next to the water heading out of Seattle to Everett.  The views on Stevens Pass were gorgeous too.

I don't know if I'll travel this way again, though the price was certainly reasonable.  It takes 8 hours (which is actually about how long it took Katie, Lulu and I to get to Seattle driving over the pass last week).  But you have lots of legroom, wi-fi, can walk around, and there's always the possibility that Bing Crosby, Danny Kaye, Rosemary Clooney and Vera-Ellen might burst into song.  So there's that.  Negative points to the weirdo 2 rows up who conducted a long phone convo regarding his being "out of Montana's jurisdiction" so they couldn't get him on that assault charge.  But I knew Mr. Hachi, our car attendant, would take care of us if the weirdo went postal.
Posted by Laurie at 12:52 PM

sounds fun! i'm actually kinda jealous, i'll have to do the trip one of these days... and sorry for not being awake to come get you - Lulu and I were exhausted! :)

You're welcome for the train pick-up. Clearly I'm the better daughter as I did come and get you risking being too tired to be nice to my students today. Don't worry; I was tired but I was also nice.

sounds interesting! maddie would totally be your train partner. :-) having to EAT with strangers would be a total panic moment for me.

definitely a ride Mads would LOVE with a capital L. I'm investigating sleeper cars to the East Coast. Having your own room with a bunk bed! Fun! And Lis, I was terrified, but I made myself talk. And it wasn't as horrible as I thought it would be.

thanks for sharing a very fun adventure, you should write for a travel magazine, or have a reality show.

the world sorely needs to have a reality show about a lady who knits, reads and occasionally goes out her front door to get the mail.