Lucy is one lucky pup, her mama brings home toys for her on a regular basis.  Which Loofy usually destroys in a matter of hours, if not minutes.


Here's her birthday present (left), "Sheepy" apparently screaming in pain after having her insides (including her squeaker) ripped out.  On the right is all that remains of Lucy's #1 fave "Joan".  Notice that Joanie no longer has a lower body.  That grimace on her face may be because she is missing from the stomach on down.  But Luce remains loyal to Joan, she's still her 'go-to' toy. 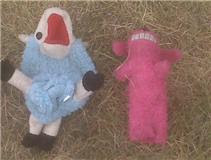 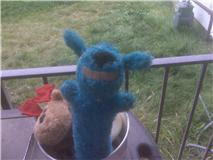 Here's "Joan II", which Katie bought, fearing that Joan I might not make it.  Lucy disdains J II, who retains her whole body and stuffing.  JOAN I 4EVER is Lucy's motto.

BTW, does anyone else in the world give nicknames to their DOG TOYS?  Those crazy Longinottis, they'll nickname anything that wanders into their sphere of influence.
Posted by Laurie at 1:00 PM

Haha, love this post. and I completely effing LOVE how much Lucy hearts her Joany. She will keep Joan FOREVER. my gal is nothing if not loyal and steadfast.

Poor Sheepy though, he did not deserve to die such a gruesome death.

She is true blue to Joany. Good Dog Lucy!

I am amazed that Joan is still around. that would last about 5 minutes in this house.

quite similar to the Original Joan (Joan Rivers) actually....

She has names for all of her dog's (Bentley) toys (new and old). Though some names may be longer than the poor toys short lifespans. They were all thoroughly chewed and slobbered over with great zeal and appreciation.

I'm so delighted to know that we are not the only bizarro's in the world! Maybe she is secretly related to us...

it makes me a little sad that your original grand puppies wally and lola never get to be on your blog!! im pretty sure they hate all of you now for abandoning them since lucy came in to the picture!

on another note, sissy still has her favorite toys as well, which she guards with her life! sheepy, lamby and snakie are all in perfect condition and hiding where bubba can never find them!

They live too far away! But now I feel guilty so may have to send them a care package

well maybe if someone hadn't moved them 3000 miles away and if that same someone would ever send me pics of them, i would totally blog about Wally and Lola. i <3 them!!! and miss them!

cara could "sheepy", "lamby" and snakey" possibly be a sheep, lamb and snake...ramp it up sister.

we lack creativity in virginia, zaide!

She was a lot smarter/more creative when she lived here. Too close to West VA (just kidding West VA'ers, don't hate)

get back before you lose any more important stuff