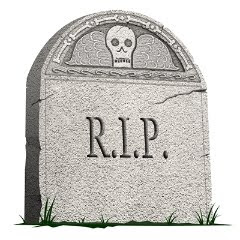 I'm at that age now where I enjoy reading the obits. The other day there was one for this lovely looking old gentleman. Part of it said "he contracted polio at age 6, and had a deformed leg ever after" or something like that. Katie and I were trying to 1. figure out WHY his family thought this was something they needed to state (there was no further mention of him rising above the disability, working to cure polio, or anything like that), and 2. what we would or would not want said in our obit.

I promised Katie that I would say (should she predecease me): "Katie feared growing a tiny limb somewhere on her body, but this never happened."

I would like to state for the record that I DO NOT want any picture of me with tubes in my nose. Should I die as a result of a) being left behind by a scuba boat and being eaten by sharks (presumably) or b) being scared to death by a clown, I would like it mentioned that my worst nightmare was tragically fulfilled.

And please bury me wrapped in my Snuggie with sufficient yarn and knitting needles to keep me busy in the afterlife.
Posted by Laurie at 6:49 PM

i read the obits too. it creeps kip out.

it's always entertaining! I love the ones where they have a picture of the person as a young gal/guy then one where they are ancient :-)

I'm with you Sister - although sweats instead of a snuggie - are you coming over next weekend? staying here???? It's always nice to read the obits in the morning and see that you (the person reading) are not named . . .

i am planning to make up some awesome death for your obit if you die in a boring way, just so you know... such as "Laurie was tragically taken from us when she stabbed herself with her knitting needle" or something.

and yes, we are coming (with Lucy in tow), so be ready!

and please be sure to call me "Lavs Plack"

We miss you Car Car!

oh btw, I apparently misunderstood Katie's fear. She is not terrified that a tiny limb will grow somewhere on her body, but that one of her current limbs will BECOME tiny. I like my version better :-0

i miss u guys too. i could imagine exactly how this conversation went!!