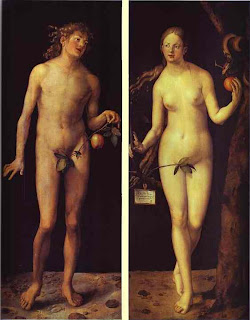 Liam: Laurie, who were the first people in this world?
Lavs: Adam and Eve.
Liam: Who came next?
Lavs: I guess their children.
Liam: Then who?
Lavs: I don't know, who do you think came next?
Liam: The third people were the Cavemen, fourth were Africans...
Alex: And the Dinosaurs!
Lavs: Do dinosaurs count? They're not people.
Alex and Liam: Yes, they totally count.
Lavs: OK, who came next?
Liam: Cavemen AND dinosaurs, then Africans, next were the Jewish people, then Indians, then Pilgrims, then US.
Lavs: Huh, interesting. Did you know that some scientists believe that dinosaurs evolved into birds?
Liam & Alex: NO WAY. Birds are totally different!
Lavs: OK, creationists. I'm just saying that's what some people think happened.
Liam: I don't think so, Laurie.
Posted by Laurie at 8:48 AM

Was that the start of worst day ever? You should have never tried to correct them. I love your car convos!

yes, it was. I wanted to 1. spank the twins with a wooden spoon, 2. quit babysitting 4EVER, and 3. have a stiff drink. Didn't get to do any of these. But the car convo was good anyways.

sorry to say but the "worst" days ever are necessary to help your really appreciate the good ones. Glad you didn't have to resort to the first two ideas!!