Yeah I know, Katie, I still have to finish your prize for the poetry contest. I'm working on it! But I've got all the knitting part done and need to get to Joann's to get the stuff to finish it. Be patient, it's going to be worth it. ;-)

So I needed some new things to knit, because I got totally sick of the Advent Tree ornaments (I have all the really futzy ones left to knit). I am knitting a pair of socks 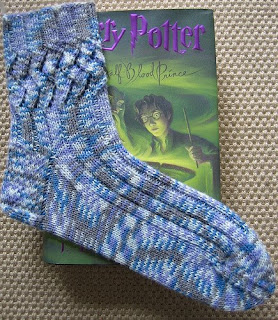 "Horcrux Socks" don't ask me why they are called this, other than they have some zig-zag lightning bolt sort of things on them, which I guess maybe is Harry's Scar or something?) I'm really mixing my genres too, because I'm using yarn that is in a colorway called "Tolkein". But it all works together...
My other current project is the Great American Aran Afghan, which is done in squares (yuk on having to sew them all together but will worry about that later). I'm going crazy and knitting this in cashmere yarn that I've been saving for just this project. NO ONE will ever be allowed to actually use this afghan, except me on special days when I feel like being the queen.
Posted by Laurie at 6:11 PM

oh my gosh, that afghan is going to be amazing. totally worth the effort and cost. yay! and i'm of course (im)patiently awaiting my 'prize'

Yes it is Katie, and your prize is too. But mom, if your afghan disappears, don't look here because I'm totally going to blame the boys for taking it. And the socks aren't that blue in real life. They're more purple and greenish right?

Will you have another poetry contest for the afghan? Pretty sure I could bring out some of my best work if I knew the prize would be amazing! So funny that you mention Joann's...just went there yesterday with Joc for the first time ever (not counting the numerous times I went with 'the Lady'). Good God is that place overwhelming! And full of old people buying really ugly things.

funny you mention Joann's, I was just there yesterday..never go there..I can tell right away they know I have no business being there. All the clerks avoid eye contact with me, and believe you me I am helpless (and old!!) Love both projects L, do understand the sewing thing. Will it look stupid if I continue knitting the back side of my pillow right off the top, so will only have three sides to sew up?

Zaide, I think that will be fine, and can't wait to see your new masterpiece! P, that is not MY sock in the pic. And no Megan I won't be offering up my cash. af. for any contests. but I will teach YOU how to knit so you can make one. BTW Joann's is loaded with fug stuff and they can smell the fear when you walk in the door. I can just see you in there, sloooowly backing toward the exit.

Zaide has the stockings in her possession. They are cabin stockings. Zaides is going to have to whip out the camera and try posting!