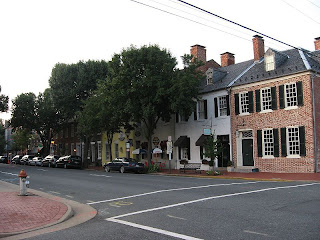 I am rising to the challenge! Here are the top 25 reasons Fred & Irene should remain on the wrong coast:

Admittedly, some of these reasons MAY just be a tiny bit lame. But I feel I have answered the question "what the hell is keeping them in VA?" satisfactorily.

I'm concerned that you may have given them too many reasons to stay, thus undoing the months of work you put into trying to get them home. Damn you and your 25 reasons! ;-)

pooh and i were just talking about the apothecary store and i tried to get him to go to the soldiers museum last weekend! no luck!!!
one of our friends has mrsa and we decided that chris could go to hugh mercers and get some witch hazel to cure it since conventional medicine doesnt seem to work!

you two! Get over to that museum. It's on the way to practically everything and you can do some shopping in the strip mall while you are there. And P, I know it was risky but I felt I needed to rise to the challenge. And yikes on the mrsa, that's one more good reason to get home, at least you'd have a nurse on site to cure it.

i would LOVE to be the apothecary curator... and god i hope you two never develop a "taste for scrapple" that is just heinous.

I hope your friend is OK. That sounds pretty serious! Love the reverse psychology. Hope it works for ya

i am determined to go to that museum if it is the last thing i do.

wait, wait! I'll come with you!