the boys and I spent the afternoon at the Y. It's a super nice facility and we had a lot of fun. We swam for about 2 hours (and Shamu the whale aka Lavs even got in the water and didn't cause a tidal wave). The slide there is a blast! The twins are very daring, they can go down 'criss cross applesauce', laying flat, head first, etc. RJ hasn't quite mustered up the courage yet, but soon. And Mikey & I went together --- once. That was enough for our little swimmer.

They also have a rad climbing wall. Try to imagine these are good pictures: 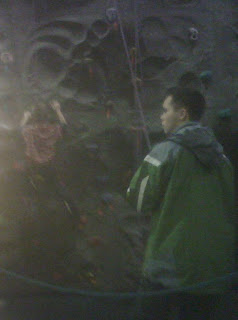 Mikey aka Spider baby! He was determined he was old enough to go. I think Mama had a minor coronary when I told her, but it's pretty safe (I think) He must have gone up at least 20 times. At the end, the nice guys who man the ropes were on a first-name basis with him, and told him "See ya, Mikey" when we left. Cute! 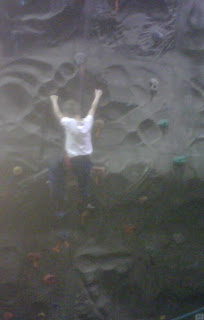 Liam venturing up the wall on the hard side.

Here's Alex climbing. Note that all the boys were wearing snow boots, so it's even more impressive that they were able to climb the wall. They are all strong! And pretty fearless, though there were a few little tears when they got 'stuck' way up high. RJ naturally chose any activity which was as far away from us as possible. So no pix of The Invisible Man. 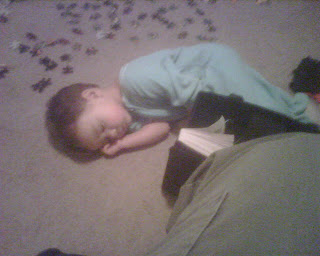 And here's our baby once we got home. It's fun to go to the YMCA!

Oh I wish we had a Y close by. That last picture looks too perfect. How long was he out for?

we had to wake him up poor thing. Mom says if he takes a nap, he's up like a crazy man till midnight.