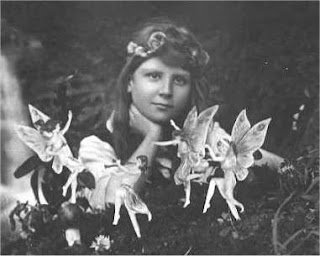 When we were kids, B-Z and I sometimes ended up down at Rosaia Bros. together. In a desperate attempt to keep her grandchildren occupied so she could actually get some work done, Toddie let us use her typewriter. B & I created the fabulous newspaper "Bits of Fairy Business". God, I would give a million bucks to have an edition of this (I'm sure!) masterpiece of the news world.
I think it also involved a lot of glitter and whatever stuff we could find to paste on. I don't remember whether our news content was actually about fairies and their doings, which would have made a rather short newspaper since I don't think either one of us ever actually SAW any fairies around. But I'm guessing we made up a lot of fairy tales. No wonder I love reading The Star!
Posted by Laurie at 3:43 AM

memory lane this week. I can't remember if it was bit's o' fairy business or "of". It was quite the journalistic effort though. I recall it just being current happenings, maybe a few interviews and yes alot of glitter. I think Renee was heavily involved too. There must be one somewhere....

probably o', since that would be 'artier'. Sure wish we could find it. Did we interview Dick and Sol next door, review the Paul Bunyan Room, discuss the scary clown nose on 8th Ave? Maybe we need to resurrect...

tell your mother to do a search of Mimi's house!