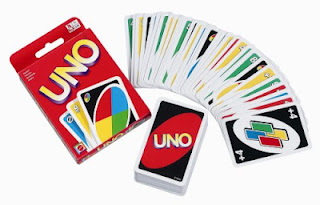 Who doesn't love UNO!?  It's the perfect card game.  And we've been playing it HARD.  In fact, we need a new deck, ours is getting really worn out (not to mention that little bleeding incident a couple of weeks ago, when I created the new card "Bloody Five")

Our games are fierce.  We nearly came to fisticuffs last night when Katie played a controversial "MOD-OUT" move, where I called the "you forgot to say UNO" as she was slamming her last card down...that win is definitely asterisked...

We have created a leader board for our tourney, and as soon as we find the chalk, scores will be kept and wins will be celebrated.

Here's a breakdown of our tourney styles (with our leader board names):

LAVS: specializes in "Death By A Thousand Papercuts".  Seldom wins, but NO ONE wants to sit next to Lavs.  She will murder you again and again with the "draw 2" "wild draw 4" and the "skip" cards.

PIA/ROTCH: Elusive presence at the card table thus far, as she has way too much of a life.  But when here, she is a fierce competitor.

CARA/DIES: Deadly. Just Deadly.  She does specialize in the "draw 50 cards from the pile until you get the Mod Card", which is a questionable tactic.

KATIE/FOY: The Queen of the well-timed Mod Card.  This Gal is unstoppable when she's throwing down the Mod.

TONY/POOH: The Thinker.  Always thinking.  Venturing close to Big Tony's incredibly slow/irritating pace at cards.  But crafty as all get out.  He has been kind of crabby the last couple of nights, as his win column remains in the zeroes.  We came real close to a repeat of Hadley's "poor sport/knock over the Candyland board" incident...in fact, we've had to invoke the Candyland Board taunt a number of times.

Stay tuned for regular updates on the tourney.  It's fiercer than water polo, with more finesse than synchronized swimming, and dirtier than a judo contestant claiming the "accidental pot brownie ingestion".
Posted by Laurie at 10:03 AM

okay what is the Mod Card, we have this "new" deck and I hate it, I want old UNO back but cannot find it anywhere. Soon you will be able to add Miss Jane to your group, she is getting fierce at her uno, and is a good taunter.

YOU MUST GET THE DECK WITH THE MOD CARD. It's a game changer! I hate some of the new Uno decks too, but this one is great.

Yay can't wait for HJP to join the tourney. I just know she will fit right in. Have her start practicing smoking and swearing...

Love me a little Teresa Guidice. We need an old deck stat. And we need to be stoned.

The Mod card is incredible. Mom conveniently left out that she seems to always draw a Mod card anytime she draws.... Questionable, real questionable.