A Banner for The New Baby 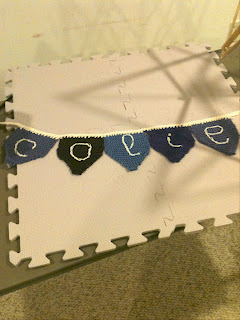 My niece Caris is expecting her first baby, a little girl named Colie.


the baby shower is tomorrow, so I got to work on my gift.

I have 5 colors of Cotton Classic (blues and purples) to knit a little bunting of 5 flags, with the name "Colie" embroidered on it (a letter on each flag)

I ended up winging the pattern, as I wanted the flags to be smaller than the ones in the pattern I originally chose (which would have resulted in flags about twice the size):

I cast on 20 sts, knit in garter stitch for 20 rows, then cast off 1 st at each edge every other row until 4 sts remained, then cast off.

I embroidered a letter on each flag to spell the baby's name, then crocheted a "string" to hold the flags, working 12 sts, picking up and crocheting across the top of each flag, then working 12 sts.  I turned and worked back across the entire string which formed a nice edge.

turned out so cute!

such a clever girl! and that you just HAPPENED to have yarn . . .

so cute, did not know you crocheted, trying to keep up with Tate??

Just learned this year so I could do my Weldon's projects, which all seem to involve insane crocheting. Not too good at it yet, Tate need not worry :0

Adorable. And what an adorable little name.

Well, we are already calling her E-coli so not too sure about the name...