Me and Bill Walton... 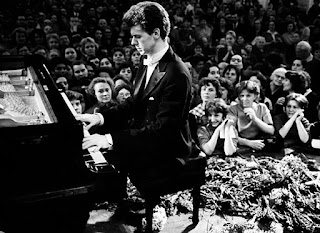 We're gearing up for March Madness by watching LOTS of college basketball games.  Which means listening to the "unique" rants of Mr. Bill Walton (someone called him "Sasquatch Shakespeare", which is dead on)

So the other night, BWalt was going off about how the Stanford team should be drawing inspiration from "the greatest road win of all time -- Van Cliburn"

Of course, I was the only person in the room who had any idea what Walton was talking about.  I drew from my vast well of trivia and explained that Van Cliburn won the 1958 Tchaikovsky Piano Competition in Russia (our arch nemesis at the time) against all odds -- a Texan winning this competition in the heartland of the Commies.

Van was given a ticker tape parade in NYC upon his return to the States and was a superstar in America as well as in Russia.

Only Bill Walton would make this connection.  Which is why you have to love the guy.
Posted by Laurie at 11:55 AM

there are no words - why would you know this???

you and Josh Narode - sheesh!

you amaze. Maybe I should have spent those formative years joining you in reading instead of playing with David Evans