We're home, laundry is done (well, mine is done -- which needed to happen as I failed to find a laundry facility anywhere in England, and had to purchase new socks and underwear plus wear every garment at least 3 times.  Ugh), we've slept in our own beds again, caught up on all our TV shows and I'm ready to recap our fabulous adventures in England!

Pictures are courtesy of Pia and Katie; I was handed a camera on Day 1.  It was taken away from me on Day 1.5

Our first stop was the beautiful city of Edinburgh ("The Athens of the North")  We definitely could have spent more time exploring Scotland.  Plus we all fell in love with the delightful people (and the accents!  Why don't Americans have good accents?  We sound like crap)  We were a mite slowed down due to my head cold, but managed to get in visits to Edingburgh Castle (fantastic!) and The National Museum.  Plus our hotel was great, right off the Royal Mile and set up like an apartment so we could cook.  I won't say our meals were great, but they were a mite cheaper than eating in restaurants. 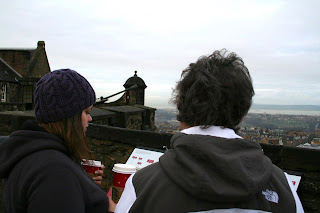 Katie and I with our trusty Starbucks cups, admiring the magnificent view from Edinburgh Castle 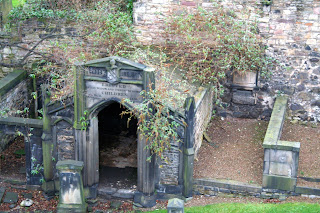 Amazingly, THIS was the view right out our hotel room window.  It's a cemetery with a monument to Scotland's Poet, Robert Burns. 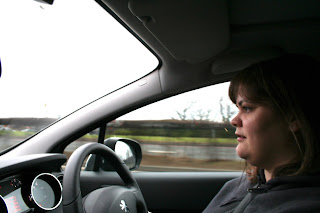 We picked up a car and headed down the coast to London.  I'm still in AWE at Katie's ability to drive on the left hand side of the road, with a manual transmission, through heavy traffic and the CRAY CRAY English roundabouts.  Never went the wrong way down a street.  Only missed a couple of exits off the roundabouts.  Only nearly crashed a couple of times -- those "mini roundabouts" are deadly, folks.  And Pia navigated the trip with skill, plus our Tom-Tom.  I wisely was kept in the back seat, where I could do little harm. 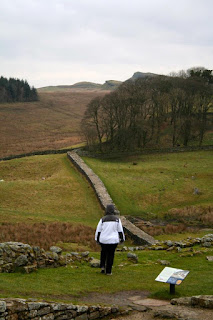 One of the highlights of the trip for me was to see Hadrian's Wall (the remnants of a Roman wall -- originally 20 feet high -- plus forts etc that spanned England and kept the Celts on their side of the Roman Empire)  Although the museums were all closed (wah), we were able to hike up to the remains of the fort and the wall at Housesteads.  It was chilly, and it was just us and the sheep that day.  Katie will never forget the hair-raising drive -- the GPS navigated us to a route that included a VERY narrow country lane, with a stone wall (and steep drop) on one side and a lot of blind corners.  She was sure we were going to meet up with an oncoming hay lorry and be killed. 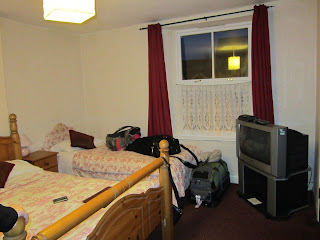 We really did well with all of our hotels on the trip.  Except maybe this one.  It had 3 beds, which was good.  And no bedbugs (that we could see).  But it was a bit tatty, maybe 2 steps above a youth hostel.  Oh well, it was only one night.  It's also where we learned that we don't really love the full English Breakfast.  Beans, tomatoes, fried bread?  Not for us.  We did love the toast rack, though.

Our next stop was York.  Love at first sight!  This beautiful walled city has retained much of its medieval architecture, and it was so charming.  We went to the Jorvik Viking Centre (cheesy but fun, kind of like a Disneyland ride)  We all most remembered the SMELL there, evidently the museum has conjured up "the 10th century urban odor".  Ugh, I'm glad we have sewers etc.

This was the view right out our hotel's front door: 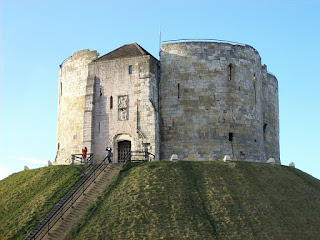 "Clifford's Tower" dates from the time of William the Conqueror (1066) 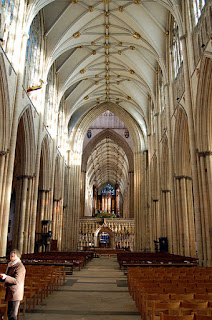 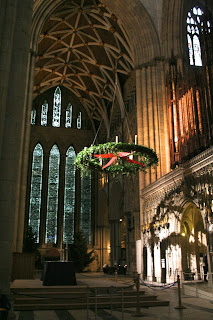 One of our favorite sites was York Minster Cathedral.  Dating from the 8th century, it's amazing.  While still a "working church", it's full of fabulous art and architecture.  We got a great tour from a parishioner/tour guide.  In the gift shop, we found knitting patterns for gargoyles and had to buy them (which necessitated a trip to "Ramshambles", a cute knitting shop in the Shambles, York's medieval shopping area): 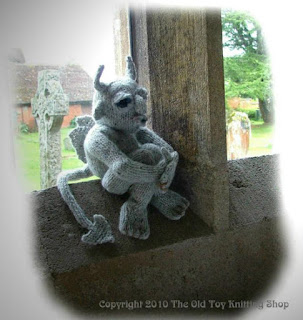 Next stop: Warner Brothers Harry Potter Studio Tour, just north of London.  I wasn't expecting to love this, as I'm generally all about seeing the REAL historical sites, but the girls were excited and they'd been such good sports about seeing all the (probably boring) things I wanted to see, I couldn't say no.  And it was really cool!  The studio has transported the film sets, props, costumes, special effects, and much more to this HUGE building and it's well worth the visit for any HP fan.  I wish they'd had more costumes (I am a sucker for the textiles), but overall it was a lot of fun, and amazing to learn how movies are made.  Here we are in Diagon Alley: 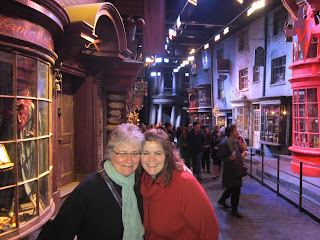 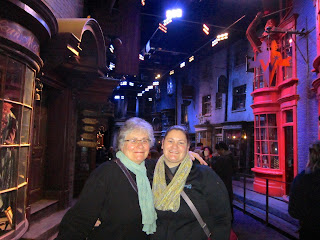 We finally made it to London!  Turned our car in (Katie was then able to unclench her jaw and relax), and took the tube to our hotel in Wembley (we were about a block from Wembley Stadium, nothing going on there over the holidays, but it definitely looks impressive), an easy 15 minute tube trip to the city centre.  A brief aside: the tube system is AMAZING.  Built in 1863, it's still the best way to navigate the city and so convenient.  Of course, I never managed to figure out what stops to get on and off, which direction we needed to go, or much else about the tube, but I didn't need to with my two excellent navigators.

In no particular order, here are a few of the things we saw and did in London: 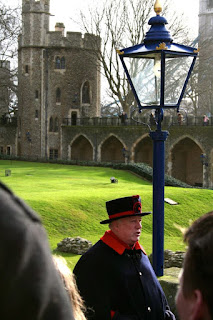 The Tower of London.  Last trip, Cara & I didn't go in (she refused to spend the 20 pounds for admission), but this time, I got my wish and we toured.  It was especially interesting to me this trip as I'm reading a book about Henry VIII and Anne Boleyn -- and the Tower is where poor Anne was imprisoned and beheaded.  We climbed stairs, checked out all the cool prisoner graffiti from the 1400s-1700s, and ogled the Crown Jewels.  Damn, they are impressive. 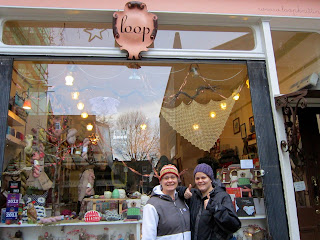 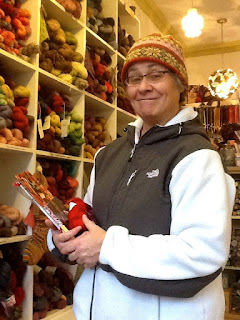 Yarn store!  We made our way to charming Loop in Islington.  Somehow, my yarn compass kicked in and I spotted the "passage" the shop is on.  A windy little back street off the main road.  The shop was delightful, and we put a dent in our souvenir budgets with yarn and pattern books.

Here we are in front of Buckingham Palace.  The queen wasn't in residence, so no chance of repeating my famous Helen Mirren encounter of the previous trip.  We tried to view the Changing of the Guards, but it was super crowded with umbrella-wielding tourists so we took a pass. 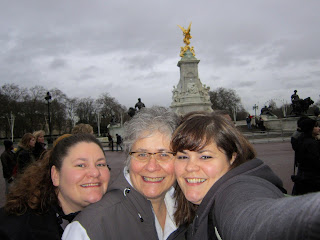 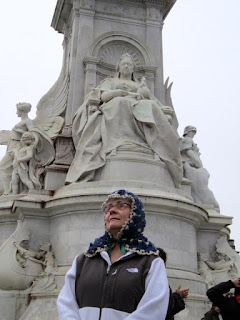 And here I am in front of the Queen Victoria monument, wearing the "Barrister's Wig".  I think we look quite a bit alike, don't you? 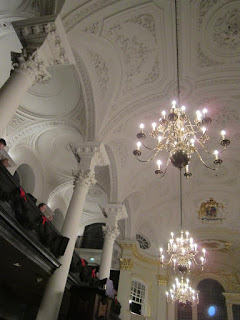 Our first night in London included a candlelight program of Handel's "Messiah" at historic St. Martin in the Field Church.  It's beautiful and the music was fantastic.  Unfortunately, I could only stay awake for the first half of the program and we ducked out at intermission. 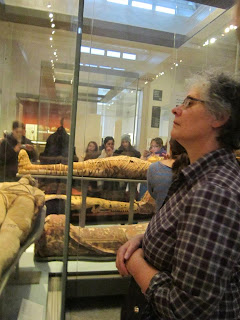 No visit to London is complete without a stop at the British Museum.  It's the most fantastic museum I've ever visited.  Here I am checking out a mummy.  We saw the Rosetta Stone, the Elgin Marbles from the Parthenon, many Egyptian artifacts, tons of finds from early British history and Roman history and so much more.  I couldn't resist buying this tiny little helmet, a mini reproduction of one of my favorite British Museum artifacts, The Sutton Hoo Helmet: 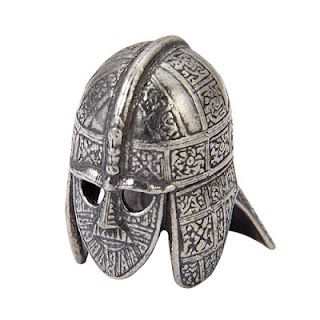 What else did we do?  Visited Westminster Abbey (I'm still amazed that you can walk into a tiny chapel, and find Queen Elizabeth I's burial monument:

"Poet's Corner" is also amazing, with plaques dedicated to England's literary greats, including Shakespeare.  There's something fantastic to see around every corner.

We braved Boxing Day at Harrod's, despite the Tube drivers going on strike, which meant no tube travel in the heart of the city :-(  We bussed it around, which was crowded to say the least.  And ended up with a 20 pound cab ride to get to our station at the end of the day.  Harrod's was crazy crowded, but not nearly as horrible as the stores that were actually doing their big "Boxing Day" sales, like Selfridge's.  Apparently, shoppers started queueing up there in the wee hours and it was utter madness.  We visited the Diana and Dodi memorial on the 2nd floor escalator landing at Harrod's (cheesy but still...)  and made a few purchases, including "Lemon and Rose Turkish Delights" for Cara (she says they are super sweet and weird.  But we knew that)  We also tried to find prizes for Lulu and Walt in Harrod's Pet Kingdom, but nothing was as good as our own "Joan" dog toys so they got nada.  Also oohed and aahed over the baby clothes; we wanted to buy something adorable and British for baby Colie, but she's going to have to do with American clothes, the stuff in Harrod's was ridiculously expensive.

We visited Kensington Palace (no royal sitings there alas), which was lovely with Christmas decor.  They have new exhibits here since my last visit, we especially enjoyed touring Queen Victoria's rooms, with lots of things from her childhood, her reign and her family.

This is how we dressed every day.  It was chilly, but we lucked out on the weather overall: 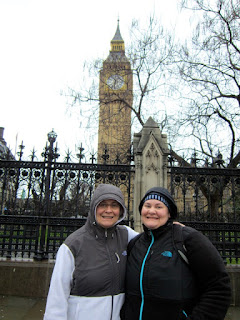 Luckily, we had plenty of hand-knit hats, scarves and gloves to keep us warm!

I'm sure I'm forgetting all kinds of stuff.  It was a fantastic trip, and I couldn't have had two better traveling companions (I only had to tell them to stop fighting a couple of times lol)  Thanks for using all your vacation time to accompany me to England, girls!  I'll never forget it!

Next time, Italy with ALL THE KIDS.  This means YOU, CARA AND TONY!
Posted by Laurie at 12:08 PM

Agh! Sooo jealous - your vacation looks like it was amazing.

What an amazing trip Lavs. I can only hope Hads loves me as much as your gals love you.

I'm the luckiest pup EVER