Folks, you would not believe the growing stack of finished projects around here.  Team Plack is in a knitting frenzy. Tony has taken to knitting like you wouldn't believe.  Here he is modeling his very first cable scarf and a cabled hat.  Lots more where that came from too -- he just produced his first color work project, a hat with dragons -- and did an outstanding job. 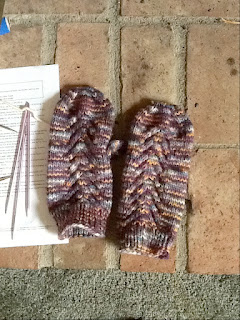 Here are Cara's Mittens of Doom.  Poor girl had to reknit the second mitten three times.  But well worth the effort, they're adorbs.  And she only threatens to quit knitting forever once a night... 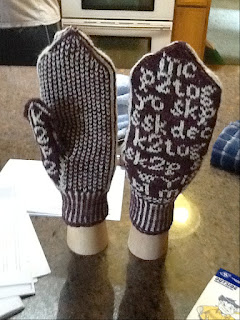 And here are my "Knittens" (mittens with knitting abbrevs.), which I had to finish up when I realized I do not have a single pair of hand knit mitts.  And I've only been knitting for 45 years..

I need to lay out all the projects the gang has knit in the last few months and take a pic, bc it's an impressive pile.
Posted by Laurie at 10:55 AM

YAY TEAM PLACKS!!!! Come to the cabin next weekend for marathon knitting!

I am fucking impressed. I never got past line number one. And I can just hear Car swearing off knitting forever.

Every night Meg, every night. I will post soon. Working on a baby sweater for Colie, and will post it when it's done. Then back to my sweater. I also have a cute hat and some mittens on the docket for when I need a break from my fall-away cardigan.