Our Other Favorite Activity 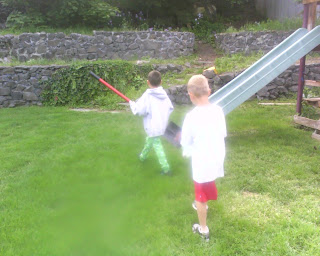 We're also a wee bit obsessed with death and dying right now (naturally enough, since the dog died last week). The boys and I have had many long, deep conversations about death and what happens (I really need to tape a few of them, they are actually quite precious and often pretty funny). This morning, RJ found a baby bird that had fallen out of the nest Mama Robin built on their back patio. After some discussion on whether baby bird was just sleeping or was in fact dead, the boys decided to bury it. Liam donned the rubber gloves and picked it up (a hotly contested job btw -- boys are NOT LIKE GIRLS), Riveria dug a hole in the back yard, Alex carried the plastic sack with remains and Mikey was chief mourner (he wasn't about to miss out on this). Flowers were strewn and baby bird got a nice send-off. Gramma Laurie tried not to be too squeamish when the boys made her look at the little dead thing ("It's not all chopped up Laurie, you can look at it"!)
Posted by Laurie at 1:16 PM

Start talking to them about B's funeral, sounds like it's going to need to be quite a gala and we'll need extra hands. And hopefully she won't be all chopped up either.

I'm kinda surprised that they didn't just chop it up themselves... seems like a boy thing to do! :)

That's awesome. I totally love boys! They are so cute. You def need to video tape those conversations.

today we dug up the bird about a dozen times, and word was that someone chopped the head off in the digging process. I did not look naturally.

OMG, boys are NOT like girls. I can't believe they keep exhuming (i don't know how to spell that) the body. One of the first things I heard when I met B-Z were plans for the funeral. Lots and lots o' candy.

B and the boys would certainly hit it off, death and candy, our favorite things. Be glad you have girls!