This Is Great News 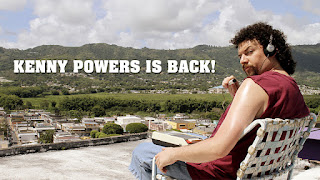 Our favorite washed-up, mullet wearing baseball player is coming back!

"Eastbound and Down" will be back for a 4th season!  Despite having aired the perfect series finale last year (spoiler: Kenny dies, then doesn't), HBO is going for another season.

This show is so wrong, yet so great.  It's worth paying for HBO (or Netflix) to watch, right after you catch up on "Game of Thrones".

In series news, Pooh and I are up to date on GoT, and we're now watching "Dexter" to catch him up on our favorite serial killer.  Next: "Breaking Bad", I'm a season and a half behind on Walter White's doings...
Posted by Laurie at 2:11 PM

Get on it!!! Breaking Bad is the best. I am on Season 3 of Mad Men. OBSESSED!

oh Mad Men, the BEST. Even though all the guys are total douches. All the time.

And haven't tried Damages. Damn you Zaids, you keep adding to my already lengthy must-see TV list. My ass will remain large.